(see links below to additional articles)

About every three days, Colleen Alexander, a chemistry graduate student, feeds cells that cause a deadly type of brain cancer. It’s a ritual that involves assessing the health of the cells under a microscope, washing away dead cells with a special solution and instilling clean medium that will nurture the living cells and generate new ones. At some point, these cells will be subjected to chemotherapy agents attached to nanoparticles made of gold. 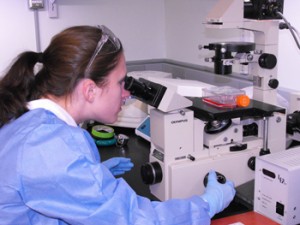 It’s a revolutionary idea for a molecular drug delivery system developed by two chemists in Syracuse University’s College of Arts and Sciences who have combined their very different areas of expertise. Their work was recently featured in the Journal of the National Cancer Institute (NCI) in a news article that highlights the NCI’s increasing focus on using nanotechnology to diagnose and treat cancer. It’s an area of research in which the NCI is investing $30 million per year, nationally, over the next five years.

The idea for attaching chemotherapy drug molecules to nanoparticles made of gold developed from a series of hallway conversations and “what ifs” between James Dabrowiak and Mathew Maye. Both are members of the college’s Department of Chemistry and of the Syracuse Biomaterials Institute, which provides highly specialized laboratory facilities for their work.

“You can put an enormous amount of small drug molecules onto a single nanoparticle,” Dabrowiak says. “That results in very high concentrations of the drug getting into cancer cells, making the drug a more effective killing agent with fewer side effects.”

The trick is in finding the most effective way to build the drug-laden nanoparticles. That’s where Maye’s expertise comes in. His lab has developed a way to attach DNA to gold nanoparticles. The drug molecules stick to the DNA-coated nanoparticles, coded to attract specific types of drugs. Once the drug is attached, the surface of the nanoparticle is coated with inert materials to prevent the immune system from attacking the nanoparticle as a foreign invader before it makes its way to the tumor.

“Ours is a completely different way of designing a molecular drug delivery system,” Maye says. “The method we use to attach drug molecules to the DNA is a unique part of the system. It’s an area of research that no one is exploring.”

In addition to delivering a higher concentration of drugs to individual cancer cells, the scientists say nanoparticles could potentially be more efficient at getting inside tumors than current drug delivery systems. Because of their rapid growth, tumors are less densely packed and more porous than healthy tissues. Drug molecules are small and tend to leak out of the pores, reducing the drug’s effect on the tumor. In contrast, the larger nanoparticles tend to get stuck inside the pores, allowing the drug more time to penetrate the tumor.

“The nanoparticles are more easily caught by tumors than by normal tissue,” Dabrowiak says. “More drug gets inside tumors and less gets inside healthy tissue, which leads to fewer side effects for patients.”